Whether you’re actually a master of the grill or just looking to roast a nice, plump weiner (giggity), you might want to know a little something about gas grill BTU ratings. So let’s start out with the most basic tidbit of backyard barbecue trivia: A “BTU” is a British Thermal Unit. See that? B. T. U. Scientifically speaking, one BTU is the amount of energy required to heat one pound of water (about a pint) by 1 degree Fahrenheit. That’s nice and all, but how does that relate to the somewhat delicate art of grilling? And just how many BTUs do you “need” in a grill, anyway?

As for how BTUs relate to grilling, the thing to know here is that the grill BTU figure is a measure of how much heat a grill can produce with the burners cranked up to full blast. Granted, nobody actually cooks this way (well, not usually), but it’s a benchmark that can be applied to all grills. This means that a lower-BTU grill will generally take a bit longer to reach the same cooking temperature as a high-BTU grill, assuming the size of the primary cooking area is the same. It’s also worth noting that a high grill BTU number also means higher fuel consumption. A possible exception to this is if you’re cooking with an infrared grill, but that’s a conversation for another time. And if you’re suddenly asking yourself, “What is an infrared grill?” I explain that here.

Now let’s talk about how many BTUs you actually “need” in a grill. Gotcha! That’s a trick question. There is no minimum BTU number that you absolutely must have in a grill. Truth is, BTU figures alone are pretty worthless. 20,000 BTUs? 60,000 BTUs? ONE MILLION BTUs? These figures ain’t nothin’ until you figure in the primary cooking area that those gas grill BTUs are heating up. Here’s what you do: Divide the main burner BTU total by the size of the primary cooking area (sq. in.). Warming racks and side burners don’t count. 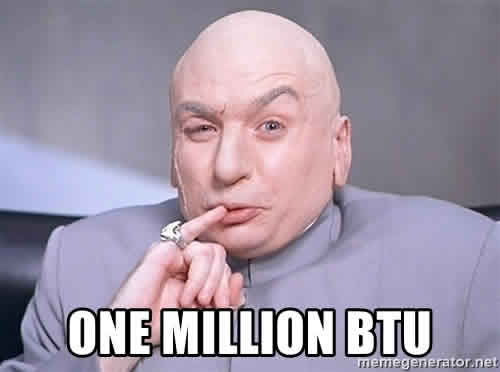 For example, the Char-Broil propane grill pictured below produces 10,000 BTUs per burner, and there are two of them. Hence, this grill puts out 20,000 BTUs of cooking power. But how big is the primary cooking area? That’s the area directly above the main burners. Again, the warming rack doesn’t count. The Char-Broil grill we’re talking about has a primary cooking area of 280 sq. inches. Time to do some math…

Now, you might hear certain grill manufacturers and barbecue scholars declare that your grill should have 80 to 100 BTUs per square inch. That’s nonsense! At just over 71 BTUs per square inch, our little Char-Broil does just fine. In fact, there are plenty of small grills out there that put out ~70 BTUs per sq. in., and people rave about them. There are also grills that cost $500 and up that put out less than 80 BTUs per sq. in., and people rave about those, too. If you pay upwards of $1,000 or more for a gas grill, chances are it will fall comfortably within the 80-100 BTU per sq. in. guideline, and that’s great. If you pay that much money for a grill, it’s fair to expect that it will produce an enormous amount of heat.

But do you “need” that much heat? Generally speaking, NO! You really don’t. You can cook that ribeye just as well with a lower-BTU grill as you can with a high-BTU grill. You might just need to crank up those temperature knobs a little higher.

And here’s something else to think about: Gas grills are typically designed to hit a maximum temperature of around 550° F. That’s for safety reasons. It seems that U.S. regulations require gas grills to have a certain amount of ventilation, and that ultimately limits how hot a grill can get. Is that the intended result? Well, maybe.

For what it’s worth, Weber states very openly that ALL of their gas grills are designed for a maximum temperature of 500-550° F. This includes everything from the entry-level Weber Spirit II series to the Weber Summit S470 with its 104 BTUs per sq. in. The Weber Summit costs a small fortune, and yet it won’t get any hotter than any other grill that Weber sells. By no means is that a bad thing … but it’s proof that BTUs aren’t all they’re cracked up to be. And, as stated earlier, high-BTU grills suck down a lot more gas than their less-powerful counterparts. Smaller, less-expensive grills are economical in more ways than one.

So what’s the point of this article? You’ve learned what BTUs are. You’ve learned how to calculate gas grill BTUs in way that actually means something. And now I’m telling you that BTUs don’t matter!

The point is this: Knowing about BTUs makes you an informed shopper, but don’t be blinded by that number when you’re shopping for a gas grill. Sure, look at the total BTUs. Look at the size of the primary cooking area. Calculate how many BTUs per square inch the grill produces. But don’t let that be the main factor that decides whether or not you buy a grill. Consider the grill’s features. Consider the warranty. Consider the price versus your wants and needs, and think about how well the grill meets those wants and needs. There’s a lot more to gas grills than how fast they pump out heat.

Check out my other site!