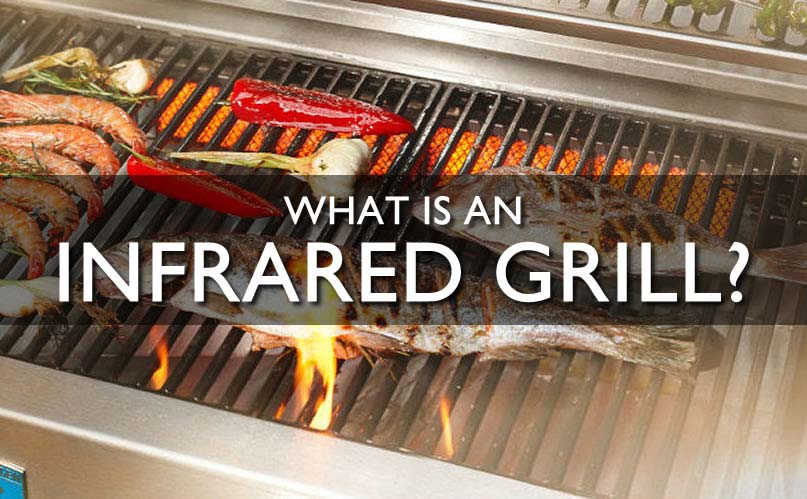 What is an infrared grill? It sounds super high-tech, but it’s really not! Sorry to disappoint you. The word “infrared” might confuse you at first if you’re thinking of infrared LIGHT instead of infrared heat. Infrared light is commonly used in weather maps and Predator movies.

Infrared heat, on the other hand, is a radiant form of heat. It’s the same kind of heat produced by space heaters, toasters, and that big ball of fire in the sky that we call the sun. If you’re still unclear on the concept, this image should clarify things for you:

Like conventional grills, infrared grills also use gas burners (or, in one case, charcoal) to produce heat, so in that way, they’re very much the same. Most infrared grills are powered by gas, but Char-Broil does make a charcoal infrared grill called the Kettleman (scroll down to check it out!).

Conventional grills simply heat up the air inside the grill, and that air circulates around your food. This kind of cooking is called convection. This method works just fine, but hot air has a tendency to suck the moisture out of whatever’s being cooked.

What is an infrared grill? It’s a grill that radiates heat through an infrared heating element.

One of the ways that cooking with an infrared grill is different is in how the infrared heating element cooks the food. Sure, some of the heat will be convection, but the majority of the heat will reach your food in a radiant form which allows the food to retain more moisture.

In other words, juicy steaks will remain juicy. To illustrate the answer to What is an infrared grill?, check out the diagram below. I stole it from Char-Broil, who makes a pretty awesome line of infrared grills.

Char-Broil has dubbed their heating element the “TRU-Infrared Emitter,” but no matter what you call it, an infrared grill’s heating element still serves the same purpose. It absorbs heat from the gas burners below, and it redistributes that heat in infrared, or radiant, form to the cooking surface above.

Now that you know the answer to the question “What is an infrared grill?”, you might have some other questions on your mind. What are some infrared grills pros and cons? Which side wins in the infrared vs. gas grill debate? For now, suffice it to say that infrared grills cook evenly, heat up quickly, reduce flare-ups, and can cook at higher temperatures.

More on all that is coming in another article. In the meantime, here are a few infrared grills to consider if you’re in the market.

As far as I know, there is only one charcoal infrared grill in existence, and this is it! As stated above, this Char-Broil TRU-Infrared Kettleman grill is different from its gas-powered counterparts. Instead of having a separate infrared heating element below the cooking grate, the infrared design is built into the cooking grate itself. An Amazon shopper asked whether this grill really has “infrared capabilities,” and fellow Amazon shopper Jim W. gave this reply:

“Yes, it does. I was a skeptic, but it does a great job. When I bought the Char-Broil Kettleman, I thought it would be another Weber Kettle Grill, but it wasn’t. It was a better grill with refinements that make it cook as a charcoal grill with several features of a gas grill.”

True, the Kettleman does kind of look like the classic Weber charcoal grill that most people are familiar with. I’m not entirely clear on what the “features of a gas grill” that Jim W. referred to are, but he seems quite pleased with his Char-Broil Kettleman.

The Char-Broil Signature TRU-Infrared 325 is a really nice-looking grill, and it’s on the lower end of what most full-sized infrared grills cost. Out of 105 Amazon reviews as of this writing, 77 of them (73%) are 5-star ratings. 17 people gave it a rating of 3 stars or less, and many of those are complaints that have little or nothing to do with how the grill performs.

There are some gripes about the design of the cabinet, a couple of people had problems with the ignition switch, one person got a damaged unit which may have occurred during shipping. As far as cooking goes, pretty much everyone says it’s awesome. “Sarasota Real Estate Geek,” who I assume is a real estate agent in Sarasota, Florida, has this to say:

“We’ve had this grill for almost a year now. It really is terrific. It’s not rusting. It has room for a lot of food items at the same time, and it cooks really well.”

If asked “What is an infrared grill?” you might be inclined to think that infrared is synonymous with Char-Broil. After all, they do kind of dominate the infrared grill market right now. There are other players, however, and Napoleon is one of them.

The Napoleon Grills LEX485RSIBNSS-1 is actually a conventional gas grill in the primary cooking area, but it comes with an infrared side burner as well as an infrared rotisserie burner. Compared to most consumer grills, this Napoleon grill is a bit pricey, but it’s a beautiful hunk of stainless steel that is well-equipped for entertaining. With six burners, 74,000 BTUs (read about BTUs here), and over 800 inches of total cooking area, it’s hard to go wrong.

As of this writing, there are only five Amazon reviews thus far, so there’s not a lot of input to lean on for research purposes. But it’s worth noting that all five reviewers gave it 5 stars. “gm1978” says the following:

“Enjoying this grill. Heats up so quickly and consistent adjustment from burner to burner. Love having the side searing burner for steaks. For the money, I am very pleased and would recommend it highly.”

(The “side searing burner” is the infrared side burner, in case that wasn’t clear.)

For the money that this grill costs, I find it somewhat amusing that they feel the need to call it “Basic.” I suppose that might be because it doesn’t come with a rotisserie burner like this non-basic Solaire infrared grill.

And like the Napoleon grill above, there’s not much Amazon shopper feedback here. However, the three buyers who did bother to post reviews all gave it 5-star ratings. “LAWRENCE H.” (his all-caps, not mine) raves:

“Amazing grill, I love it! I bought it a month ago and tonight we had our second cookout, and just like the first, this grill was flawless. Super quick warm-up, just press the igniter and light the fires and 3 minutes later, put on the steaks. We had inch-thick ribeyes tonight,I just followed the heating directions and 9 minutes later, the steaks were done. And perfect! Nothing I did, I just turned on the grill, turned the steaks twice and watched the clock, that was all there was to it. Very sturdy stainless steel construction, all American made.”

Oh, and btw, if you’re wondering, “Does Weber make infrared grills?” the answer appears to be no. Or, if they do, they’re not very good at telling people about them. I have seen one review on a different product review website that claims the Weber Genesis II LX E-340 is an infrared grill, but that doesn’t appear to be the case. Why lie about that? Groan.

Some product review sites are run by jerks and liars. I might be a jerk, but a liar I am not! Anyway, Weber does offer an infrared rotisserie burner on some of their high-end Summit grills, but it looks like that’s about it.

And one final note: I would like to pray to the Google gods that this article ranks highly whenever someone searches for What is an infrared grill? Shameless, I know.

Check out my other site!